The first and most important step in selecting your SmartMotor™ is determining the load characteristics. Below is a review of understanding torque curves and understanding power curves. Motor sizing parameters are primarily based on torque curve and moment of inertia, and with these two factors users can find the ideal operating bandwidth and use it to ensure proper SmartMotor™ servo size choice.

Each set of torque curves depicts limits of both continuous and peak torque for the given SmartMotor™ over their full range speed. 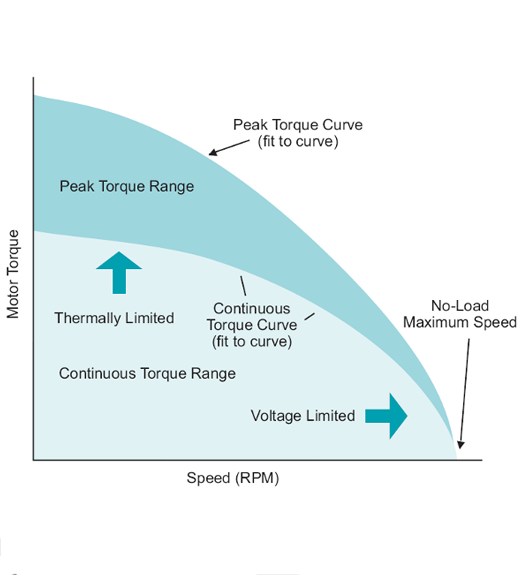 Peak Torque Curve
The Peak Torque Curve is derived from dyno testing and is the point at which peak current limit hardware settings of the drive prevent further torque in an effort to protect drive stage components.

Continuous Torque Curve
The continuous torque curve is also derived from dyno testing, but is instead the point at which the temperature rises from an ambient of 25ºC to the designed thermal limit.

For example, the motor will be placed on the dyno tester and set to operate at 1000 RPM continuously with the load slowly increased until the controller reaches its maximum sustained thermal limit. This limit is either 70ºC or 85ºC depending on the model number. All PLS2 SmartMotors are set to 85ºC.

The far lower right side of the curve is limited by supply voltage. This is the point at which Back EMF suppresses any further speed increase. Higher supply voltages will shift the zero torque point of the curves further to the right.

Ambient Temperature Effects on Torque Curves and Motor Response
If the motor is operated in an environment greater than 25ºC, then it will reach its thermal limit faster for the same given load thereby further limiting continuous torque.

Therefore; any given motor torque curve MUST BE linearly de-rated for a given ambient temperature from 25ºC to 70ºC, 85ºC for all PLS2 SmartMotors.

Supply Voltage Effects on Torque Curves and Motor Response
Higher voltages have two-fold effects on torque curves. As mentioned above, raising voltage will shift the curve to the right. It will also allow higher current into the drive. However, torque curves depict torque at a given velocity.

If you double supply voltage, the motor can sustain twice the original velocity. But since acceleration is the differential of velocity, it can achieve 4 times the original acceleration. This is useful for high speed indexing and fast start/stop motion. 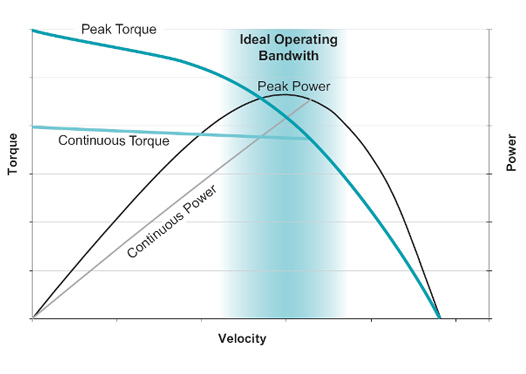 All torque curves in this catalog also have SHAFT OUTPUT Power Curves overlaid on them as well. Power can be found by the following equation:

For any given mechanical system being moved by a SmartMotor™, it is ideal to ensure the motor is running within its optimum performance range. This can be achieved via proper mechanical system design by adjusting one of the following as it may supply:

Suppose you have a load that requires 300 RPM at the output of a gear head. Suppose the optimum speed range for the motor is 2100 RPM.

Divide the optimum operating speed by the load speed to get the ideal gear reduction. In this case : 2100 RPM / 300 RPM=7. So a 7:1 gear reduction would allow the motor to operate in its most efficient range.

So an ideal pitch would be 2mm.

When sizing, torque curves and moment of inertia should be considered:

For any given product model number, there may be variations of as much as +/-10%.

The following diagram depicts data points collected from dyno testing of a given model motor. A best-fit torque curve is created from these data points and is then de-rated to at least 5% below the worst case data points. The de-rated curve is what is advertised. This means that within any given model number, EVERY motor sold will perform at or better than the advertised torque. Theoretically, ALL motors should be no less than 5% better than advertised and may be better than 20% higher. 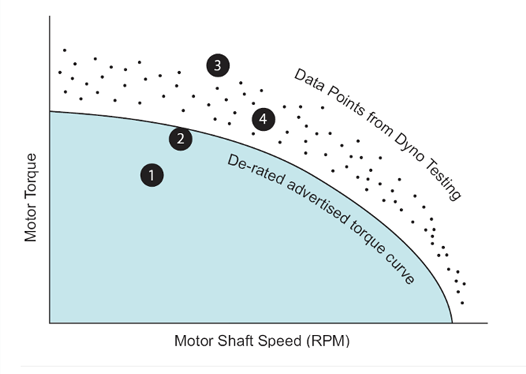 Why? Because it is in the area of +/-10% variation expected in motors for a given size. This can become a major problem. Imagine designing a machine that operates in this range. Then you replicate that machine with many of them running on a production floor. One day, a motor at the lower end of the +/-10% expected variation would be placed on a new machine and that motor would get spurious drive faults. It would appear as though the motor is malfunctioning because… “all the other motors work just fine”. This is unfortunate because, in reality, all motors were undersized and operating outside of their advertised limits.

This is why it is important to properly calculate load torque to ensure the correct motor is designed into the application. Never assume that without proper load calculation and motor sizing, that testing of one motor means all of that size may work. This is simply not the case. Try to keep operating conditions below the advertised limits to ensure reliable long-life operation.

A basic understanding of moment of inertia serves well in ensuring proper motor sizing. It is one thing to look at static points on torque curves, but it is altogether different when considering the dynamic aspects of loads being accelerated at high rates.

Matching Motor To Load
A common rule of thumb for SmartMotor™ sizing is that the load should have no more than 10 times the moment of inertia of the motor rotor that is driving it. This gives a good starting point and typically allows for safe sizing over a wide range of applications. Since a rotating load wants to maintain the same velocity, then when a motor attempts to accelerated or decelerate the load, it must overcome the moment of inertia of that load by applying enough torque to accelerate it or decelerate it.

It takes more torque to change speed than it does to maintain a given speed.

In the same manner, for the motor to slow down a load, the load’s moment of inertia will keep the motor going the same speed and will, in effect, back-drive the motor turning it into a generator. In extreme cases, this can result in over-voltage damage to the Drive stage.

How to Improve Moment of Inertia Ratio Between Motor and Load
Adding gear reduction to a motor gives it more leverage to prevent back driving and also gives it a better advantage in accelerating a load up to speed.

For any given change in gear reduction, you get a proportional change in speed and static torque but you get a squared change in acceleration and dynamic rate of change of torque. The result is that by adding gear ratio you gain a squared decrease in the ratio of moment of inertia between motor and load.

Therefore the motor has a greater advantage in both accelerating and decelerating the load. It adds protection against damage to the system as a whole.